Not the Recommended Way to Begin Losing Weight–But Essential

Just a few days until the program officially begins, although I have been easing into it. Other than the Christmas weekend that I spent with my two kids up outside of San Francisco, I’ve not had beer, and just an occasional wine over the past couple of weeks.  More on the program and getting ready for it in another post.

This is NOT part of the program, although it should be part of most people’s life program once they hit 50. I’m 57 and had never had one. It’s easy to put off if you don’t have doctor’s orders, symptoms, or a trigger event (friends with colon cancer) that scares the hell out of you to get one.

I knew I had waited more than long enough. Plus, for the only time in my life I hit my health insurance deductible (two cataract surgeries) so I needed to get it in (absolutely no pun intended) before the end of the year. I hit that goal, having it done today, December 30th. Which happened to be the only day this week they could fit me in (enough with the “in” references!).  Which also happened to be at the exact same time as Nebraska playing Tennessee in their bowl game. Procrastination is almost never a good idea.

I’ll spare you all of the details. I can tell you that the prep elixir that begins the night before certainly does its job. It does not taste that bad. I wouldn’t order it at a bar, but tolerable. What was worse was not being able to eat anything solid the day before, although after missing the first meal the hunger subsides. Which Pam, my live-in health coach tells me is not a good thing. That’s why simply eating less in attempts to lose weight doesn’t work and is actually harmful. The body’s metabolism slows down, and you actually store fat instead of lose it.  More on that in the future.

Going into the procedure I wasn’t nervous about what was about to happen itself. Everyone says it’s the easiest part of the entire process. Which it was. (My compliments to Dr. Zitomer and the entire staff at Digestive Health Specialists in Scottsdale.  I had quite a bit of fun with them joking around. There’s a lot of material to work with when someone works with butts all day).

I was a bit anxious anticipating the results though. My outlook is always positive, so of course I kept telling myself everything would be good. But there’s always that “What if?” that’s nagging in the back of your mind.

When I woke up (when the anesthesiologist said “You’ll be out in eight seconds,” she was wrong. It was seven by my count) the two nurses, anesthesiologist and doctor were in the middle of a conversation and chuckling. Which I guessed, wouldn’t have been happening if they found something undesirable. So I thought that was a good thing.

Doc Zitomer immediately said, “Everything looks good!” ( As I write this, my junior-high humor wants to make the obvious joke, given what he just spent 20 minutes looking at, but I’ll refrain.)

Then in my still-a-bit-woozy state, I remember him mentioning something about a tiny Paul Lyyp. Which was confusing since I didn’t know anyone by that name. Tall or short.

Then he explained. Oh, that. A tiny polyp that they routinely remove. And from his thousands of procedures of experience he said, with confidence, it was nothing to worry about.  High five with my IV-attached hand.

So, not to get all preachy here, but as you have probably heard from the countless Public Service Announcements on TV and radio (if you’re my age you might still listen to those things), colon cancer is one of the most preventable cancers there is when detected early. If you’ve been putting it off, trust me, it is not that bad. Compared to the alternative. Those tiny Paul Lypps are what turn into cancer unless they are found early, and escorted out. Don’t just do it for yourself. Do it for those who love you.

As I finish here, I just realized that I’ve been writing and sharing material longer than some adults reading this have been alive. And this is the first time I’ve talked about my colon. And, mercifully and hopefully the last. 😉

What was your experience? What will you do? Please leave your comments below and do pass this along to someone whom you feel should see it. 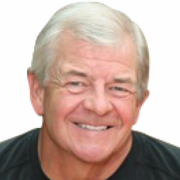 Day One - What I'm Doing

It’s the first day and I think I’ve lost five pounds already! Well, maybe not, but it’s coming. As I begin the journey, for those who aren’t familiar, today I’ll give a brief summary of what I’m doing. Future posts won’t be this long. Thankfully, right? What is the “30 Days to Healthy Living” Program? This is a lifestyle program ...